Human Foods that are Toxic to Dogs

We all know that dogs will eat pretty much anything (grass, sock, an entire cake, you name it!).  A dog’s way of exploring and learning about the world is more through scent and taste, which explains why they are more likely to sniff and eat things they shouldn’t. Whatever is in front of them seems like a great idea, dogs are not picky at all!  But we also know that there are a lot of human foods that are toxic to dogs.

Many human foods are actually unsafe for our dogs to eat.  Dogs’ metabolisms are completely different from ours.  You might be able to eat grapes and chocolate and even apple seeds with no problem, but they could spell discomfort or even disaster for your dog.  The foods on the list below could cause upset stomach, vomiting, and diarrhea for your pet.  Some might give your dog weakened ability to breath, or even worse – kidney problems or seizures.  And some of the foods noted here are outright poisonous to dogs and eating them could be fatal to your beloved pup.

You might think that just because it’s good for us humans, some foods can also be suitable for dogs, but that’s not true. Why? Because a dog’s metabolism is totally different from ours. So foods that are just fine for you can be bad news for your dog, causing vomiting, diarrhea, upset stomach, weakened breathing, and more severe issues like kidney problems, seizures, and even death!

Human Foods that are Toxic to Dogs:

Alcohol is toxic to dogs, causing blood sugar drops, low blood pressure, low body temperature, and worse.  Besides the obvious sources of alcohol, watch out for rubbing alcohol, antifreeze, and even…

This one is less obvious, but dogs can actually get alcohol poisoning from yeast.  The yeast creates ethanol, which gets absorbed into your dog’s bloodstream and can cause bloating, alcohol poisoning, and can even be fatal.

Tartaric acid in these foods cause vomiting and diarrhea.  Even one grape or raisin can cause sudden kidney failure and be fatal to your dog.

There is a small amount of cyanide in apple seeds.  In large doses, this toxin could harm your dog.  The tough cores & stems could also cause your pet to choke.

Like apple seeds, cherry pits (and stems & leaves) also contain cyanide, which slows down the transport of oxygen in your dog’s blood.  These pits are also large enough to get stuck in a dog’s digestive tract, causing blockages and intestinal problems.

All the parts of the avocado contain persin.  Eating the leaves, fruit, seeds, or even bark of the avocado can cause vomiting an diarrhea in dogs (and birds, horses, & rodents!).

Caffeine is the culprit here.  It raises your dog’s blood pressure and can cause cardiac arrhythmias or even seizures.  Caffeine is also not good for dogs’ intestinal tracts and can cause vomiting and diarrhea.

It’s more rare, but the high fat content in macadamia nuts can cause pancreatitis in dogs.

Like in humans, some mushrooms are poisonous, so it’s best to avoid letting your dog eat any mushrooms.

Another food that contains toxic compounds for dogs, which can cause gastroenteritis, or (you guessed it!) vomiting and diarrhea.

Did you even know green potato poisoning was a thing that can happen to dogs?  Solanine occurs in green and raw potatoes, skins, and potato plant foliage.  Eating too much solanine can cause heart & breathing problems, and ….yes, gastrointestinal upset.

Rhubarb leaves are really bitter, so most dogs aren’t going to eat enough of them to cause trouble.  It’s rare, but eating rhubarb leaves can cause renal failure in dogs.

Another source of the toxin Solanine (along with its friend, tomatine).  The plants and younger green tomatoes are more harmful than the ripe fruits.

Like most nuts, this is another choking hazard or potential intestinal obstruction for your dog.  But walnuts are extra susceptible to mold or fungi that can produce toxins that can cause tremors or seizures in your pet.

This one is really bad, so be extra careful here!  Even small amounts of xylitol can cause low blood sugar, liver failure, and seizures, can can even be fatal to dogs.  Xylitol is used as a sugar substitute in human foods and products, and can be found in sugar free gums, mouthwash & toothpaste, sugar free baked goods, medications, lotions/ gels, even deodorant!  Make sure to read those labels and keep products containing xylitol well out of reach of your pet! 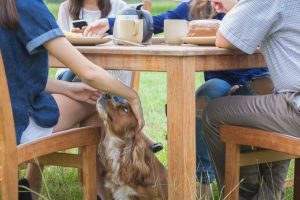 It’s best to stick to foods made for dogs to be on the safe side.  But if you do decide to give your dog human food, make sure to double check first.  For a list of human foods that are safe for dogs to eat, check out this article from Medical News Today.  No one wants their pet to end up with a health scare because they ate the wrong thing!!

This week on our blog... Tips for traveling with y

New post on our blog! Benefits of owning a dog. Di